"l was elected the hard way," said Judge Graham. "When I say that, I mean I had to defeat an opponent in a primary and then defeat the incumbent in the general election. Not very many judges have to go through that gauntlet."

"It was very humbling," said Judge Graham. "We have a six county area that we cover, so I had to visit a lot of courthouses, and go to a lot of meetings and a lot of suppers, a lot of church gatherings, a little bit of everything."

In fact, he advises any candidate seeking a judicial vacancy to do the same.

"If you really want it, you've got to get up early and go everywhere you can go," said Judge Graham. "l went to factories, courthouses, city halls and homes. So, that's what I told the ones who have asked me. If you work hard enough, you can get elected."

Sitting on the Bench

Judge Graham said becoming a judge is something he felt strongly about early on in his career.

"l think probably deep down, I always thought that would be a good thing for me to do," said Judge Graham. "I always had plenty of opinions. That's a place where at least some of your opinions may have real force and effect. I think most judges think they can probably contribute something towards justice more directly if they are on the bench, so that's what I did."

Judge Graham said having a hand in justice is pretty self-fulfilling.

"It's something that not everybody gets a chance to participate in," said Judge Graham. "Every day, you're making decisions that affect peoples' lives in great ways and small ways. That's what I like about it, really, just having a hand in trying to correct wrongs. Usually, that's what the court system is there for, to correct wrongs or solve disputes in a way that's fair to the parties and the rule of law."

As any judge will tell you, there are certain cases that are more memorable than others. For example, Judge Graham heard Tennessee's first DNA case.

"lt was about a fellow who abducted a woman from a convenience stand, sexually assaulted and killed her in the woods in Grundy County," said Judge Graham. "The most important proof was DNA.

Collection of DNA was an early science then. They didn't have the kind of probabilities that they do now. I think the probability in this case, based on what they had, was about 1 in 15,000 people could have matched the defendant's profile."

Another memorable trial was held during the time the Tennessee Supreme Court adopted Comparative Fault.

"The opinion came down during a trial I had and we used that opinion to instruct the jury," said Judge

Graham. "I'm not 100% sure if I made the very first decision under the newly adopted doctrine of Comparative Fault in Tennessee, but it had to be one of the first."

However, he was the first and only judge, so far, to bring "Court TV" to Marion County's Jasper, Tenn. courthouse.

"l got a call from 'Court TV,"' said Judge Graham. "At the time, that was the only court tv program out there and they wanted to cover a murder case that I had ordered to be retried. Of course, I didn't think there was anything all that exciting about that case but they did. They asked if they could come up and put it on "Court TV." I said yes because I felt like whatever was going on in my court was open for the whole world to see."

So, their crew came from New York City and set up a control room in a small space next to the courtroom. The trial, which lasted just three days, turned out to be more interesting than Judge Graham had anticipated.

"We had a retired police officer who was acting as the court officer in that trial and the issue came up about how semi-automatic pistols worked," said Judge Graham. "l didn't know this at the time, but our court officer thought he would show the big city folks in the control room how it works. During a break, he was back there with all these technicians who are broadcasting all over the world with this trial. He shows them how his revolver works. He opens the cylinder and all of the bullets fall out all over the floor. It was just like Barney Fife (from The Andy Griffith Show). I'm sure they thought, 'What in the world are we doing here?"'

The case was also interesting because of the attorneys involved.

"Johnny Cochran was one of the play-by-play people during that trial and a couple of other big name lawyers," said Judge Graham. "We're down here in Jasper, Tenn. It was exciting, and the case ultimately ended up really the way I thought it should have with the defendant being convicted of a lesser offense."

Coincidentally, the last day of the trial fell on election day. Both Judge Graham and the district attorney were on the ballot.

"We both got elected," said Judge Graham. "Still the process of elections was working at the same time the court was working."

Judge Graham's celebrity status continued when Judge Perry, who sat on the bench with Judge Graham, called to tell him he saw him on "Court TV." Judge Graham even received a special letter from now deceased University of Tennessee law professor and beloved attorney, Donald Paine.

"Don Paine wrote the book on Tennessee evidence and everybody has great respect for him," said Judge Graham. "He wrote me a letter saying he was so proud of Tennessee lawyers and they looked so good during "Court TV." He just wanted to compliment all of us on how we handled the trial. I thought, that's truly high praise."

Judge Graham also appreciates the support he's received from his fellow judges over the years, especially when something controversial happened, such as the time a religious group asked county commissions in his district to post the Ten Commandments in the courthouses and courtrooms.

"We didn't know about this, it just happened and I showed up one morning to see the Ten

Commandments right behind me on the bench," said Judge Graham. "l took it down immediately and it sort of astonished some of the deputies there. Somebody who maybe didn't wish me well reported me to the local tv stations, so they all got in on that. It was a front page story in the Chattanooga Times. It was extremely clear that you could not in any way promote religion in a courtroom. That's for another place. All my fellow judges fully backed me on the removal and it worked out fine. It was concerning at the time. I believe in separation of church and state. It's hard to take a position against the Ten Commandments, but it was the right thing to do and I'm glad I did it. It can be quite lonely sometimes on the bench. Support from your colleagues is important."

Over the past 28 years, Judge Graham, now retired Judge Perry, retiring Judge Smith and Chancellor Stewart supported each other. It's time for the "old hands," as Judge Graham calls them, to pass the torch.

"We now have Chancellor Melissa Willis," said Judge Graham. "She is a great person and quite competent. We are supporting her in everything she wants to do as we have done for Judge Angel.

Although Judge Graham is officially retired, he is remaining on the bench on a special designation through the end of August to cover cases until his successor takes over September 1.

"l haven't focused on retirement yet," said Judge Graham. "Right now, I have four grandsons. One is a senior in high school and the other three are under six years old. Because of the ages I'm sure I will be spending considerable time with the three youngest grandsons."

"As far as other things, I'll just have to wait that out," said Judge Graham. "1 used to enjoy model trains, but I don't really anticipate picking that up again. My fine motor ability and my vision might make it more difficult to really do much of that, but it is a hobby I always thought I would do after retirement."

Whether or not model trains are in his future remains to be seen. One thing that is for certain is his time on the bench was enjoyable.

"l had a very positive experience," said Judge Graham. "I much more enjoyed the 32 years on the bench than the 17 preceding years as a practicing lawyer. I have enjoyed the privilege of being a judge and working with the other members of the bar and bench."

Prior to being elected to the bench in 1990, Judge Graham held a private law practice, from 1976-1990.He also served as the Director for Legal Services, County Technical Advisory Service, University of Tennessee, from 1973-1976; County Attorney for Marion County, from 1977-1990; and City Attorney for the City of South Pittsburg, from 1985-1990.

Judge Graham received his undergraduate degree from Vanderbilt University, in 1968, and his Juris Doctor from the University of Tennessee, in 1973, where he was President of the Student Bar Association and a two term member of the Dean's Advisory Council. He also received the 1971 Outstanding Appellate Team Award, along with future Judge John W. Rollins.

He is a recipient of the Rotary International Paul Harris Fellow Award; Outstanding Service Award, South Pittsburg Rotary Club; and the Army Commendation Medal with Oak Leaf Cluster for service in Vietnam. 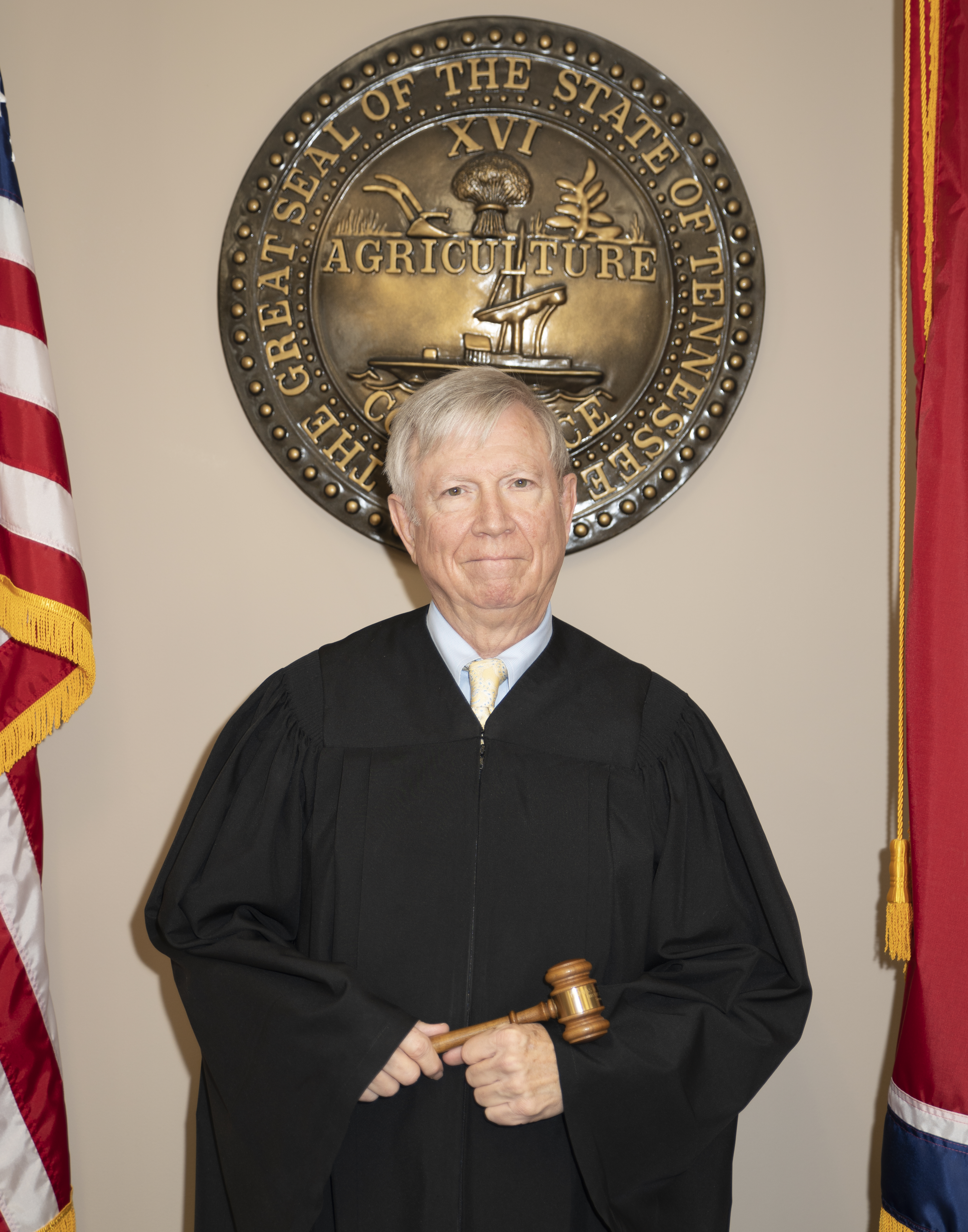