Thinking about becoming a judge? Judge D. Kelly Thomas, Jr. advises bringing your patience and a good sense of humor.

“There was a murder defendant that told me it was a kangaroo court and I was a chicken s--t judge,” said Judge Thomas. “I thought, you know, I could find him in contempt, but giving somebody who’s going to serve a life sentence for murder ten days for contempt would make me look sillier than he did. Plus, the sheriff would be mad because he’d have to keep him in our jail. He wouldn’t be able to take him on to the Department of Corrections. My initial reaction to that was to just burst out laughing. I thought it was pretty funny.”

Another favorite exchange was with a man who appeared before him with an agreement on his second probation violation.

“I told him if he came back to court, again, and was in violation, he pretty well knew what would happen,” said Judge Thomas. “He said, ‘Yes, you would send me to the penitentiary.’ I said, ‘You better bring your toothbrush with you.’ At our next break, my court reporter jumped all over me about what I said and what a heathen I was. I said, ‘What in the world are you talking about?’ She said, ‘That man didn’t have a tooth in his head.’”

Throwing His Hat in the Ring

All kidding aside, sitting on the bench is serious business. Judge Thomas put a lot of thought into the possibility of a judgeship early in his career.

“My hero was my father and he was a really good lawyer,” said Judge Thomas. “I had no desire to do anything but that and I’d been practicing about 12 years, the same time as the judge I ran against had been on the bench. He had been an assistant district attorney. I had lawyers from the majority party come by and encourage me to run against him in the general election because none of them would run against him in a primary.”

Judge Thomas started thinking about how he started out with his cases, looking at them from all points of view. It was something that came naturally to him.

“I had filled in a few times as a General Sessions judge after I turned 30,” said Judge Thomas. “I enjoyed that and I was impressed by how much my perspective changed being on the bench, as opposed to being one of the lawyers. It was sort of automatic. It’s unusual, but everything appeared different to me.”

Judge Thomas was elected to the Fifth Judicial District Circuit Court, Division II, in a contested election in 1990. He describes it as an interesting experience.

“It was a small town. You’ve a got few families who are pretty politically active and my opponent was from one of those families,” said Judge Thomas. “The political inner circle didn’t think I’d beat him, so that’s how I got in. I was fortunate enough to get elected and then, as they say, the rest is history. I enjoyed it from that point on. Running in a race against an incumbent judge is very draining and stressful, but if you win in the end, it’s a gratifying experience.”

Judge Thomas was re-elected in 1998 and 2006, before being appointed to the Court of Criminal Appeals by Governor Phil Bredesen later that year.

Judge Thomas looks back fondly on his years as a trial judge, a role he really enjoyed. He also appreciated the good working relationships he developed in Blount County. From the lawyers to the public defender’s office to the district attorney’s office to the sheriff and clerks, everyone worked well together.

“People ask me if I miss that and I do, but the thing I miss most is the drug court,” said Judge Thomas. “We started what I think is the second drug court in the state in 1998. Those were great years. I really, really liked it because I felt like the drug court team was having a huge impact on these peoples’ lives who were just being controlled by addictions. It was one of the more meaningful things I’ve ever had a role in.”

Another matter of importance to Judge Thomas is the Rule of Law. He hopes all judges taking the bench after him will honor it.

“That’s the beauty of it, in my opinion,” said Judge Thomas. “We’re all human. We make mistakes and when you have two other sets of eyes looking at your work, it gives you a sense of security. It also helps you get to the place you want to go and that is simply to get the questions correctly answered on appeal. I’d tell them to do that, don’t take themselves too seriously, and let the issues come to them. Don’t go out looking for an issue with your guns cocked. That’s not our job. And, again, keep a sense of humor.”

Judge Thomas plans to hang on to that sense of humor when he tackles fly fishing in retirement.

“The last time I tried to fly fish, I was in high school and I spent all my time trying to get my line and my hook out of the rhododendron,” said Judge Thomas. “I’ve got a young lawyer friend who is quite the fly fisherman and Judge Curwood Witt is, as well. I think I am going to get them to teach me. I hear a lot of good things about it. I think I want to give it a shot.”

Until then, he has plenty of activities to keep him busy.

“I’m going to do a lot of land clearing in Henderson County on my wife and sister-in-law’s 70 acre place,” said Judge Thomas. “I’m moving my tractor and my bush hog down there, so that will be fun. We’re going to travel some. I’ll work a lot with the Boys & Girls Club, and I think I may mediate a little bit to just sort of keep myself involved in the legal world. I think with my experience as a trial court judge, that ought to help me be fairly effective at it. I won’t know until I get in it, but I’m planning to do that as well.”

He graduated from the University of Tennessee with a Bachelor’s Degree in 1974 and a Juris Doctorate in 1977. 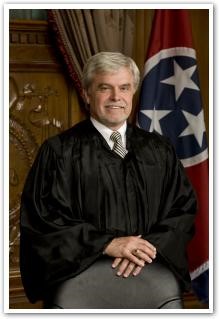