First Judicial District Circuit Court Judge Jean A. Stanley is retiring next year, after 30 years of service to the people of Carter, Johnson, Unicoi and Washington Counties.  She wanted to announce her retirement early to give those who are interested in taking her place time to establish their campaigns.
“It’s been the greatest job in the world. I’ve truly, truly enjoyed it and getting to meet the people from all across the state, the judges, has been a wonderful experience. You can’t beat it. If you are in the legal field and you want to do something spectacular with your life, this is definitely something you should consider. It’s a wonderful career,” said Judge Stanley.
Before taking her seat on the bench, Judge Stanley had many conversations about it with her friend, former Supreme Court Justice Penny White. Once she decided it was something she wanted to pursue, she started campaigning nearly every day. It’s something she hopes those vying for her vacancy will take to heart.
“I actually ran two campaigns. I ran against Attorney General Lewis May. He was appointed to take Penny’s job when she left this bench and he had announced he was running again. So, I announced I was going to run and he said he wanted to do it a few more years. It was a very challenging race. I lost by like 10 votes out of 40,000 votes. It was a really, really, really gut-wrenching experience, but by then I felt like this was my job,” she said. “I was going to run again no matter what and had a second contested race. If you haven’t run for this position, you have no idea how much work it is. So, you need to be running right now and you need to be doing something every single. day. I took Sundays off, but was campaigning every day. As far as having this job, you just need to have a lot of stamina and be tireless.”
Judge Stanley was elected in 1994, ready to make the transition from lawyer to judge.
“I was really ready for a change. I had been a trial lawyer for years. I practiced civil rights litigation in federal court all across the state of Tennessee and it was so interesting and so exciting, and those cases and laws changed a little bit and that litigation was not happening for me like it had been previously. My practice had become more and more domestic and I really missed the trial work. I missed doing something different,” she said.
During her early years on the bench, Judge Stanley created the First Judicial District Court Clinic in Johnson City. The nonprofit organization supports the courts struggling to make decisions regarding high-conflict divorce and co-parenting cases. It also provides supervised parenting opportunities for parties. She also served on a number of committees and acted as the eastern section representative for the Tennessee Judicial Conference.
“I like being a judge because every day is something different. I learn something brand new. I don’t think lawyers realize how much they teach us because they think we know everything when we don’t. I love hearing and seeing and learning something new all the time,” she said.
Judge Stanley received her undergraduate degree from East Tennessee State University and her J.D. from the University of Tennessee.  Before being elected to the bench, she practiced law with Sherrod, Stanley, Lincoln and Goldstein, serving as a trial lawyer in state and federal courts. However, Judge Stanley’s retirement will not include a return to her law practice.
“No, I don’t want to practice law. I’m too used to being right in the courtroom all the time. I don’t think I could get used to somebody telling me no. I think it would be tough, but I am going to go and get my mediation training. I’m kind of fascinated with that aspect and I think probably a lot of my fascination is because of all of the pro se people who come before us now. A lot of what we have started to have to do on the bench is figure out a solution and spend more time listening. I don’t know how that will translate over to mediation, but I think it will be interesting,” she said.
Off the bench, Judge Stanley and her husband, Jesse Rainer, raised Rocky Mountain Horses on their small east Tennessee farm. The couple is proud to have owned and trained double world grand champion, Ellie’s Eli. Her love for animals runs deep, as she serves on the board for the Humane Society of Washington County/Appalachian Highlands Humane Society.
“My heart goes out to the animals who desperately need us.  The Humane Society is a great protector of them.  We have initiated important programs, including those that help support the local animal shelter as well as the abandoned and neglected animals we take into our care.  The Humane Society has developed a foster home network, a food pantry, and a program to help care for veterans’ pets while their humans receive much needed medical services.  We have a low fee, income-based program to provide spay and neuter services, something we urge everyone to do for their animals.”
Her passion for helping animals is something she will continue after her retirement.
“As I come off the bench, I’ve already been told that I am about to become a fundraiser for the Humane Society. I want to continue to do some work with them. Between that and traveling, my husband and I just went out and bought two new bikes, and we’re just going to have some fun,” she said.
Judge Stanley’s official retirement date is set for August 31, 2022. 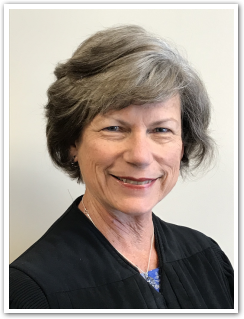