The Honorable Seth Walker Norman’s portrait was unveiled in the Division IV courtroom of the 20th Judicial District Criminal Court in the Justice A.A. Birch Building in Nashville. Judge Norman was appointed to this division of the court upon its creation in 1990. He continued serving in that position for 28 years, stepping down in 2018.

Judge Norman’s lengthy career was notable for many reasons, but his establishment of the groundbreaking Davidson County Drug Court (DC4) in 1996 has proven to be his signature achievement.

“The accomplishment that is going to set him apart from all his judicial colleagues for many, many years is the creation of DC4, the Davidson County Drug Court,” Former Justice Koch said. “What I know from watching him create that from afar is that he broke new ground when he created that court, and he simply willed that court into existence.”

Those words were echoed by McGee, who practiced in front of Judge Norman many times and who served as the master of ceremonies at the event. He remembers talking to Judge Norman about Drug Court when it was still just an idea.

When DC4 was created, there was nothing else like it in the state, and little else like it in the country. But Judge Norman’s idea of a long-term residential program dedicated to the holistic treatment of non-violent offenders with substance use disorders has proven as persistent as it was ahead of its time. There is routinely a long waiting list to get in the program, which focuses on treating its participants’ mental health as well as substance abuse issues.

“Despite the budgetary and bureaucratic head winds, the Drug Court has grown and thrived, and it now sets the standard for drug courts in Tennessee, the United States, and indeed around the world,” Former Justice Koch said. “Without Judge Norman’s efforts the lives of literally thousands of the Court’s graduates and their families would not have been changed for the better.”

Nancy Hooper is one of those people whose life was profoundly changed by her stay at DC4. She spoke about her experience at the unveiling ceremony.

When she entered the program she had just made her fourth trip to jail and was feeling hopeless. Multiple stints in different treatment centers had failed. Her professional life and her relationship with her family were in shambles.

“I was spiritually and morally bankrupt,” she said. “And, Judge, when I met you here that day, for the first time in a long time I began to have hope. Because there was something about you that I just knew in my heart that if I gave you a reason to help me, if I did the right thing, and through my actions showed you I wanted something different, I knew that you would help me, and you certainly have.”

Hooper met Judge Norman nearly seven years ago. She has been sober ever since, is thriving in her career, and currently serves on the board of the Nashville Drug Court Support Foundation.

To McGee, it is clear what Hooper sensed in that court appearance before Judge Norman; what it was that instilled in her that refreshing current of hope. She was reacting to two of Judge Norman’s most fundamental qualities.

Judge Norman’s capacity for caring about others and his ability to feel what others are feeling are what McGee believes gave him the drive to create DC4 and oversee it for so many years.

Those qualities were evident in Judge Norman’s remarks at the ceremony.

“There’s not another experience in the world like sitting on the bench and seeing the trials and tribulations of people and doing what you can to help them,” Judge Norman said.

He was always careful to view the people in his courtroom as “good people with bad problems,” as he put it, not simply criminals. As proof of this he offered an analogy. He asked how many in the audience had heard an adult ask a child what they want to be when they grow up? Some kids may respond they want to be a lawyer, or a doctor, or a pilot, but they never say that they want to grow up and be addicted to drugs.

“But that’s what happens,” Judge Norman said. “So you have to remember that those people are really good people.”

In Judge Norman, this emphasis on the humanity of the people in his courtroom is combined with an unwavering realism about the nature of addiction. That realism has made him unafraid of challenging the status quo throughout his career.

“You cannot incarcerate your way out of addiction,” he said. “That’s just all there is to it. We can’t build enough prisons for that. You can build four treatment beds for what it costs to build one penitentiary bed. It just makes sense to me to put people that deserve it in treatment rather than place them in the penitentiary and just lock them up. I always felt that way.”

More than 20 years on, that philosophy is still working to save the state money and to change lives. Judge Jennifer Smith, Judge Norman’s successor on the Division IV bench and at DC4, said that, at capacity, DC4 saves the state $1.5 million each year by diverting felons from the Department of Correction into a treatment-based setting. It also helps reduce recidivism by addressing the root causes of criminal behavior and by creating addiction-free households for the program participants’ children.

“Criminal justice reform is the topic of the day in legislatures across the country, and DC4 is a model of what that reform can look like,” Judge Smith said. “That is Judge Norman’s legacy. It’s a standard that will not soon be repeated, if ever, and that legacy will continue to shine bright in the lives of the residents, children, and communities that benefit from the positive change offered at DC4.”

A Korean War veteran, Judge Norman served in the United States Air Force 1953 to 1957. He continued to serve in the Tennessee Air National Guard until 1965.

Judge Norman graduated from the Nashville School of Law in 1962. During the 1960s, he served in the Tennessee House of Representatives and on the State Democratic Executive Committee. He was a delegate to the 1968 Democratic National Convention.

Since his election to the bench in 1990, Judge Norman has amassed a long list of accomplishments and awards. In addition to the founding of DC4, among the most notable accomplishments are his founding of the 13th Judicial District Recovery Court in 2011 and the Morgan County Residential Recovery Court in 2013. He has also served in a number of different capacities on a number of different government committees and councils over the years, including the United States Department of Education’s Advisory Committee on Safe and Drug Free Schools and Governor Phil Bredesen’s Criminal Justice Coordinating Council.

The portrait of Judge Norman that was unveiled in Nashville was commissioned by Mr. and Mrs. G. Kline Preston, IV, and was painted by the prominent portrait artist Maestro Igor V. Babailov. Babailov has been commissioned to paint portraits of many famous figures over the years, including President George W. Bush, United States Supreme Court Justice Samuel Alito, and Popes Benedict, Francis, and John Paul II.

The unveiling ceremony was well-attended. Former Governor Bill Haslam joined many members of the bench and bar in paying tribute to Judge Norman. One national leader who wished to attend but was unable to was former Deputy Director of the White House Office of National Drug Control Policy Scott Burns. He sent a letter, which spoke of his respect for Judge Norman’s innovative career.

“Judge Norman accepted people who in any other person’s assessment…deserved to be locked up for a long time,” Burns wrote. “But what Judge Norman knew was that deep down he was looking into the eyes of a good person, a person who’s real problem and the cause of all of it was that this person suffered from the disease of addiction.”

Judge Norman’s portrait will hang in perpetuity in good company. Located directly across the room from his portrait is another. Its subject? Judge Norman’s father, Jack Norman, Sr. 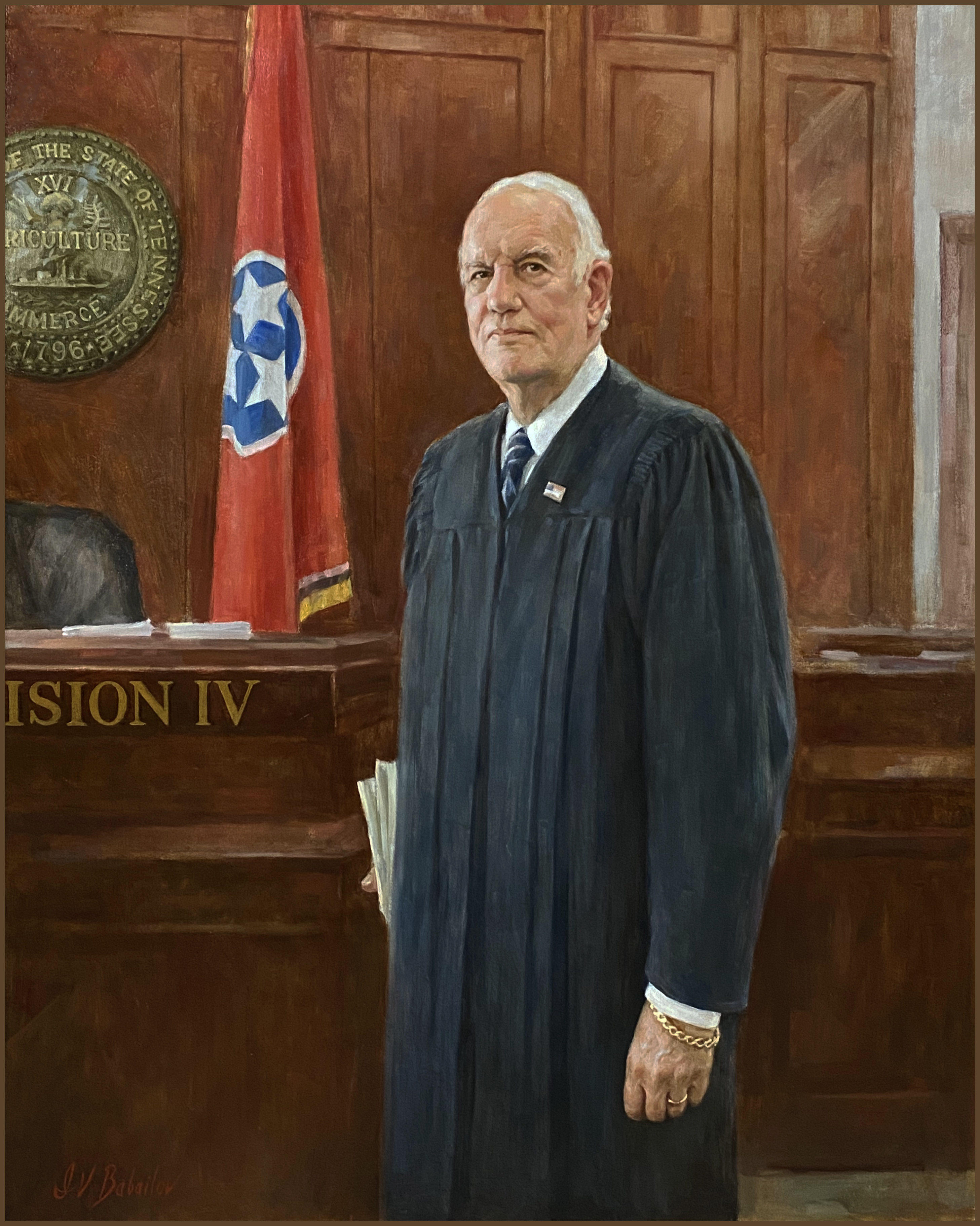