General Sessions Court Judge
Judge Betty Thomas Moore attended Memphis City public schools, graduated from Carver High School, and attended the University of Memphis, earning her undergraduate degree (1982) and law degree (1986). Judge Thomas Moore practiced law as an Assistant Public Defender in the criminal courts, earning a reputation as one of the best trial attorneys in Shelby County. Assigned to defend Capital Murder cases from 1994-1998, she was one of the few attorneys in Shelby County qualified to try death penalty cases. In August 1996, she was one of 46 attorneys nationwide invited to attend Gerry Spence’s Trial Lawyers College in Jackson Hole, Wyoming, and was invited back as a staff member of the August 1997 college session. Judge Thomas Moore is a member of the Ben F. Jones Chapter of the National Bar Association, the Memphis Bar Association, the National Association of Women Judges, the Tennessee General Sessions Judges Conference, the Association of Women Attorneys and the American Judges Association. She is a board member of the Judicial Council of the National Bar Association, and serves on the Judicial Ethics Committees for the State of Tennessee and the American Judges Association. She also was appointed by the Tennessee Supreme Court in September 2006 to serve on the Access to Justice Task Force. Judge Thomas Moore was previously an adjunct professor at the University of Memphis, teaching Civil Law and Procedure for over 14 years, and is an active member of the Mount Moriah East Baptist Church. Judge Thomas Moore speaks to churches, school groups, and other organizations about women in the law and the Civil Courts, and coached the MLGW Explorers Mock Trial group to 1st place victory in the ABA’s 1997 National Mock Trial competition in San Francisco, California. Judge Thomas Moore is married to Alvin Moore, a Lieutenant with the Shelby County Sheriff’s Department, and is the proud mother of eight children. Judge Thomas Moore is the first elected female Judge in the history of the General Sessions Civil Court. She began serving her first 8-year term on September 1, 1998, was re-elected in August 2006, and re-elected again in August 2014. As a General Sessions Judge, Judge Thomas Moore has handled thousands of cases and hundreds of trials consisting of, but not limited to, disputes ranging from car accident cases, evictions and property foreclosures, disputes filed by consumers against home improvement agencies, contractors, automobile repair establishments and other service providers, etc. Also, Judge Thomas Moore’s duties as a General Sessions Judge include presiding, for two months each year, over mental commitment hearings under the Judicial Hospitalization Act. 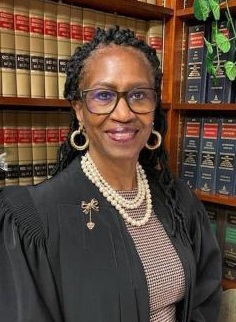