As a small child growing up in a fairly impoverished neighborhood in Memphis, Deborah Means Henderson had a startling answer to the question of what she wanted to be when she grew up. “I would tell the grown-ups that I was going to be a lawyer,” Judge Henderson said.  She did not know any lawyers except Perry Mason, who she saw on her television.

Today, Judge Henderson is serving as the President of the Tennessee General Sessions Judges Conference. She is the first African-American to serve as president of a Tennessee judicial conference. She is the eighth female overall (although the third in a row) to lead the general sessions judges.  She is the first judge from Shelby County to serve as president in over 30 years. She was elected by her peers across the state and was sworn-in at the organization’s September meeting.

An Uncertain Start, An Inspiring Finish

While her family and community were tight-knit and supportive, Perry Mason, although a fictional character, really was Judge Henderson’s role model.

“I have no idea why I identified with him, but the way he carried himself, the authority he had, the knowledge that he had, the work that he did, I just knew that was something I wanted to do,” Judge Henderson said.

Finally, at Central High School, Judge Henderson met a lawyer. It was a teacher who happened to have a law degree but preferred education. Once she learned of Judge Henderson’s interest, the subtle encouragement and tips were the push the young lady needed to become a National Merit Semi-Finalist and earn a scholarship to Christian Brothers College.

She would be the first person in her family to graduate from college. Her mother had dreamed of college, but her circumstances dictated otherwise. Judge Henderson is not, however, the last person in her family to attend college. Her sister went back for her degree. And her brother-in-law. Her mother retired from the post office and went back to school to earn a bachelor’s degree, master degree and started a PhD program before her health had other plans.

For Judge Henderson, law school remained aspirational. After college, she got married, had a baby, and followed her then-husband while he pursued a military career. A few years in, she made the choice to return to her beloved Memphis with her child and took a full-time supervisor position with Delta Airlines. She was feeling down one day and her grandmother asked her if law school was her dream.

“I said it was but I didn’t think I could ever do it because I had a baby and I was working,” Judge Henderson said. “She said ‘don’t you worry about the baby, I will take care her.’ I asked how could I ever repay her and she said I could repay her when I had grandchildren by doing the best I could do for them.”

With a live-in grandmother taking over the household and child care responsibilities, Judge Henderson headed to law school at the University of Memphis while maintaining her full-time position at Delta Airlines.

“My grandmother had a third-grade education and she made law school possible for me,” Judge Henderson said. “The day she watched me graduate was truly special.”

After passing the bar exam, she headed to the law firm of Peete Higgs & Armstrong, one of the city’s most well-known minority firms. It was the perfect fit.

“The teaching strong mentors provide is essential,” Judge Henderson said. “If I had gone out on my own, or was with lawyers who were just getting by and not being particularly effective, I would not be the person I am today. The lawyers at my firm demanded that everything be done correctly and if you didn’t know then just walk down the hall and ask. Everyone was supportive. Anyone would help. Anyone would have a conversation with me about a case. It gave me a good reputation with the judges on the bench.”

The firm also nurtured a plethora of future jurists. Of the eight attorneys on board when Judge Henderson joined, all would become judges, including current Court of Appeals Judge Kenny Armstrong and the late Chancellor Floyd Peete, Jr., the late Judge W. Otis Higgs, Jr., and the late Divorce Referee Patricia Odell.

During her 17 years of private practice, Judge Henderson served as a Special Master in Shelby County Chancery Court, a member of the juvenile defender staff in juvenile court, and on the Tennessee Board of Accountancy.

In 2006, Judge Russell Sugarmon announced his retirement from the bench and an open seat was available. Judge Henderson made the decision to run.

“This was Judge Russell Sugarmon’s seat so I knew I had very big shoes to fill,” Judge Henderson said. “He was a very vocal and active member of the civil rights movement. I knew I could help my community in my own way to try to follow his footsteps.”

While Judge Henderson is more reserved than her predecessor, when she sees a problem, she instantly searches for solutions.

“One thing I noticed is that so many people who represent themselves in general sessions court have a good claim, but don’t know how to present their case,” she said. “As I saw that more and more, I knew we needed a mediation program. People can present their case and make their claim without knowing all the procedure and rules. I started a mediation program and it has been a tremendous help to our community.”

The program was so successful that Judge Henderson was awarded the Grayfred Gray Public Service in Mediation Award by the Tennessee Association of Professional Mediators in 2021. The award was presented by Governor Bill Lee. She also received the Mid-South Community & Justice Mediation Award.

As president of the general sessions conference, Judge Henderson plans to encourage other judges to set up mediation options in their courtrooms.

“The cooperation of attorneys is essential to a mediation program and judges can be the catalyst for making this happen in their communities,” she said. “It is so beneficial.”

Judge Henderson also hopes to focus on broadening the use of interchange and designations among general sessions judges as a way to relieve shortages, prevent backlogs, and bring new faces into local courtrooms.

“We really need to encourage more cooperation among the judges. In Shelby County, we tend to get hooked up with one or two judges and we can wear them out. There are other judges nearby,” she said. “There needs to be more collaboration and cooperation when it comes to helping each other. I think judges in rural areas in particular have trouble finding people to sit for them.”

The expansion of specialty courts and specialty dockets is also important to Judge Henderson.

“There is a need for a lot more specialty courts,” she said. “In Shelby, I think we need a housing court. The other day I had 222 people on one eviction docket. I think if we had a housing court, we wouldn’t have had 222 people on that eviction docket. Housing is such an issue in Shelby County and other places in Tennessee right now. General Sessions courts handle such a large volume of cases across the state and we need to focus on improving the system across the board.” 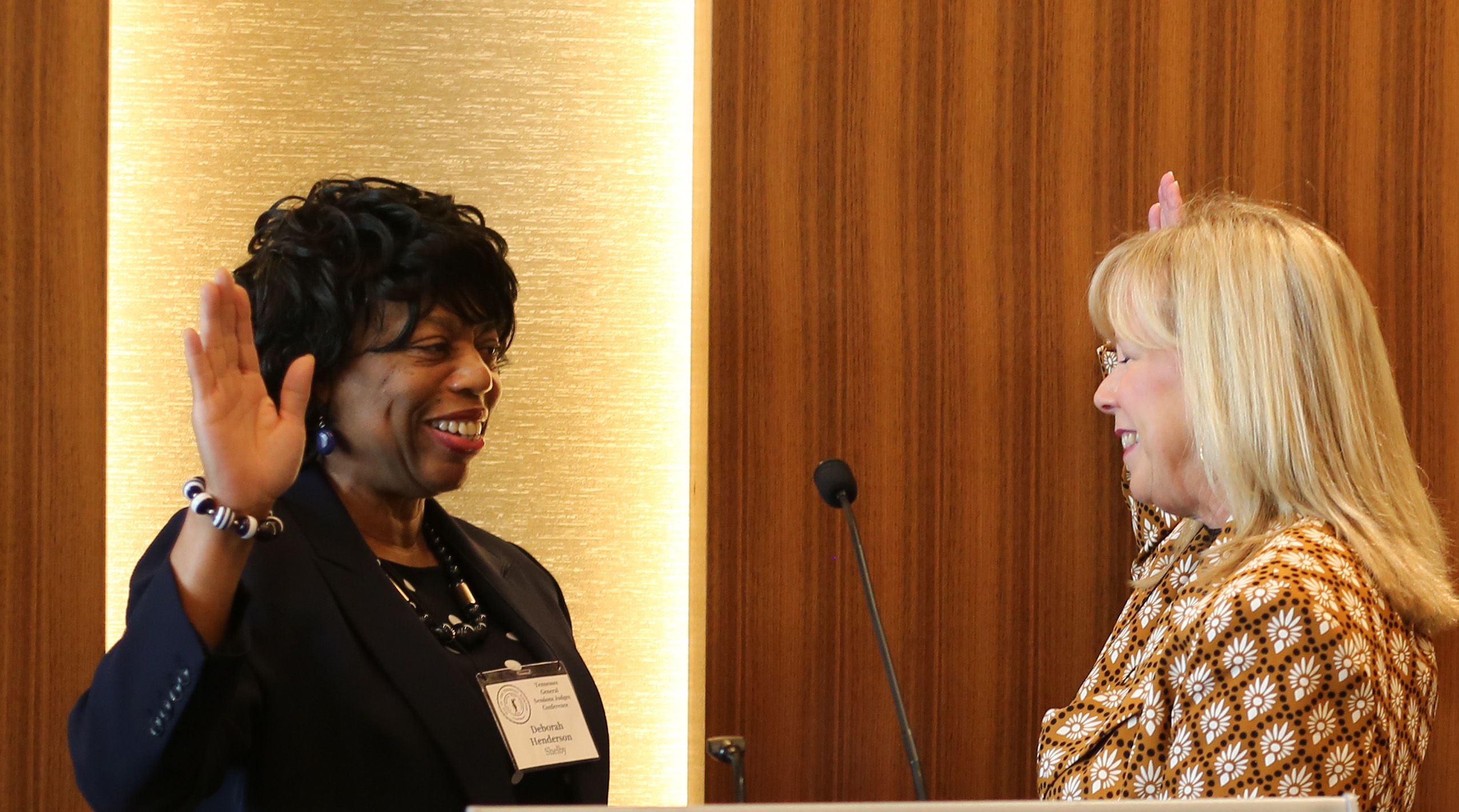