“My best friend.” “Always someone I could talk to.” “Our moral compass.” “Larger than life.” Those are the words the Tennessee judiciary has used to describe their friend and colleague Judge John Everett Williams, who passed away unexpectedly on September 2 at the age of 68.

Judge Williams was the presiding judge of the Court of Criminal Appeals and his impact, much like his personality, was immeasurable.  He took fashion and grooming guidance from one of his heroes, writer Mark Twain.  His bow ties, seer sucker suits, and audacious color choices were a sight to behold. But it was not a show. His fashion choices paled in comparison to the heart and soul of the gentleman from Carroll County.

“He was larger than life in every way,” said Judge Tim Easter of the Court of Criminal Appeals. “My wife was with me when I received the call and one of the first things she said was ‘there are probably a hundred people that are going to say today I lost my best friend.’ I have spoken with people inside and outside the judiciary over the last few days, many have said that he was their best friend. That is just how he made you feel. He was so invested in people, the whole person. Something that drove him was to make sure everyone he knew was a whole, well-balanced person.”

Even before he was the presiding judge of the 12-member court, Judge Williams was famous for calling court members just to “check in.” Not to follow-up on an opinion in process or to discuss a docket, but just to see how they were doing, chat about family, and provide the occasional pep talk.

“I have known him as an attorney almost 40 years and we were colleagues on CCA for 22 years until my retirement,” retired Judge Tommy Woodall said. “We developed a deep, close friendship. He was as close a friend as I have. We talked almost daily – about cases, life, a lot of things. I valued his ability to give me advice on all kinds of things – personal and professional. He was always someone I could rely on. I feel like my safe haven is gone. I could go to him about anything. I could call him about anything.  He is going to be missed by a lot of people.”

When Judge Camille McMullen joined the Court of Criminal Appeals in 2008, she was new to the judiciary and the first African-American female to serve on a Tennessee appellate court.

“He made sure I was welcomed, including just basic things, even though he was not the presiding judge. He actually showed up in my office in Memphis to make sure things were running smoothly. That is just the type of person he was,” Judge McMullen said. “His care and concern for me lasted throughout our friendship.”

Over the years, the pair developed a close bond.

“He was raised at a different time than I was. But, he made it a point to make sure that he connected with my generation, with me as a person who was different from him. To understand and meet me where I was,” Judge McMullen said.  “I have never met anyone like that. He just became very special.”

Judge Williams always went out of his way to welcome new members to the court.

“He let me know immediately when I joined the CCA that my voice on this court was just as valuable and just as strong as the gray hairs on the court,” Judge Easter said. “I have tried to pass that message along when a new member comes on this court. The new judge’s voice is equally as valuable as judges who have been on the court for years. Judge Williams taught me that and I will pass that message along.”

As a jurist, Judge Williams authored over 2,000 opinions in his nearly 25 years on the court. CCA judges sit as a panel of three, which means he likely was on the bench for over 6,000 cases.  He was especially known as a strong supporter of the Fourth Amendment to the United States constitution.

“The Fourth Amendment was his passion,” Judge Easter said. “He was dedicated to protecting the right of the people to be secure in their persons, and house, against unreasonable searches and seizures.”

In a 2015 case when officers entered a private home without a search warrant after knocking and talking despite No Trespassing signs, Judge Williams wrote in his dissent “If governments can use a single sign so effectively against citizens, why then can not citizens use a sign equally against governments? Whether the words are used by the government or a citizen, “No Trespassing” means no trespassing.”

Judge McMullen pointed to the writing as a classic.

“He was always concerned about how a case would impact people,” Judge McMullen said. “He had an incredible moral compass. He was the moral compass of our court and was a great person to bounce to discuss ideas. He never tried to push or impose, but he was a great ear when the court faced tough issues.”

Also in 2015, he was highlighted in a Washington Post article on footnotes he included in recent cases that stated he believed the court should always use titles when referring to adult witnesses as a show of respect.

On the court, he was known for being respectful, methodical, and educational when expressing an opposing view on an opinion. In 2018, his colleagues elected him presiding judge, the first rural West Tennessee judge to hold the position in more than 25 years.

“He was a larger than life individual and it is hard to fathom that he is no longer with us,” said Judge Curwood Witt, who is the only current member of CCA to have served longer than Judge Williams. “His service as presiding judge has been exemplary. He was well-suited for it. He took the role just before the pandemic hit, which brought about so many unusual and challenging issues. John Everett was up for it and he guided us through it very well. He is already terribly missed.”

Over the years, Judge Williams served with almost 20 judges on the Court of Criminal Appeals, including three colleagues who would later serve on the Tennessee Supreme Court – Chief Justice Roger Page, Justice Jeff Bivins and former Justice Gary Wade.

“We went to rival high schools and the first time I heard his name was when he was running up and down a high school football field,” Chief Justice Page said. “We were young West Tennessee lawyers together and we joined the judiciary in the same year – 1998, when I was elected to the trial bench and he was appointed to the Court of Criminal Appeals. This is a devastating loss for our Judicial Family. He served his community, his state, and the judiciary with endless compassion. Job well done, my friend.”

In 1999, The Tennessee Supreme Court established the Tennessee Lawyer Assistance Program, a confidential assistance program for lawyers, judges and law students. Judge Williams was a natural fit for the strenuous task of listening, counseling, intervening, and referring. Touched by the tragic death of two individuals and the emotional and substance misuse of others close to him, he was willing to travel the state and share his regret in not being more proactive in identifying issues and offering assistance. He later served as chairperson for the organization, touching the lives of hundreds of Tennessee judges and attorneys when they were most in need.

In more recent years, Judge Williams relished in the role of doting grandfather. From boating trips to softball tournaments, he was quick to provide his friends with the latest updates and pictures. And, of course, there was magic. He was a longtime member of the International Brotherhood of Magicians, often performing for Carroll County students, colleagues, his granddaughters, and at the occasional judicial conference.  He was an excellent storyteller and a self-proclaimed thespian, actively involved in the Dixie Carter Performing Arts and Academic Enrichment Center.

He was a Carroll County native and operated a law firm in the county for 17 years before joining the judiciary at the encouragement of his friend Judge Woodall, who made the transition about two years prior. In his hometown, he was Citizen of the Year; president of the bar association; and president of the Lion’s Club. If an organization – the American Heart Association, the American Cancer Society, the American Red Cross, Habitat for Humanity – needed a hand, Judge Williams was willing. He likely made a new friend in the process.

“He would remind me that every day is not promised with the special people in your life so make sure you spend time where you need to,” Judge McMullen said. “He is already missed and he won’t be replaced ever. When I last talked to him, he just called to make sure I was OK after a decision came out. He just wanted to make sure I was OK and that was his process. His last words to me were ‘Camille, you are thinking with your head and you need to go ahead and act with your heart.’”

Information on arrangements can be found here. 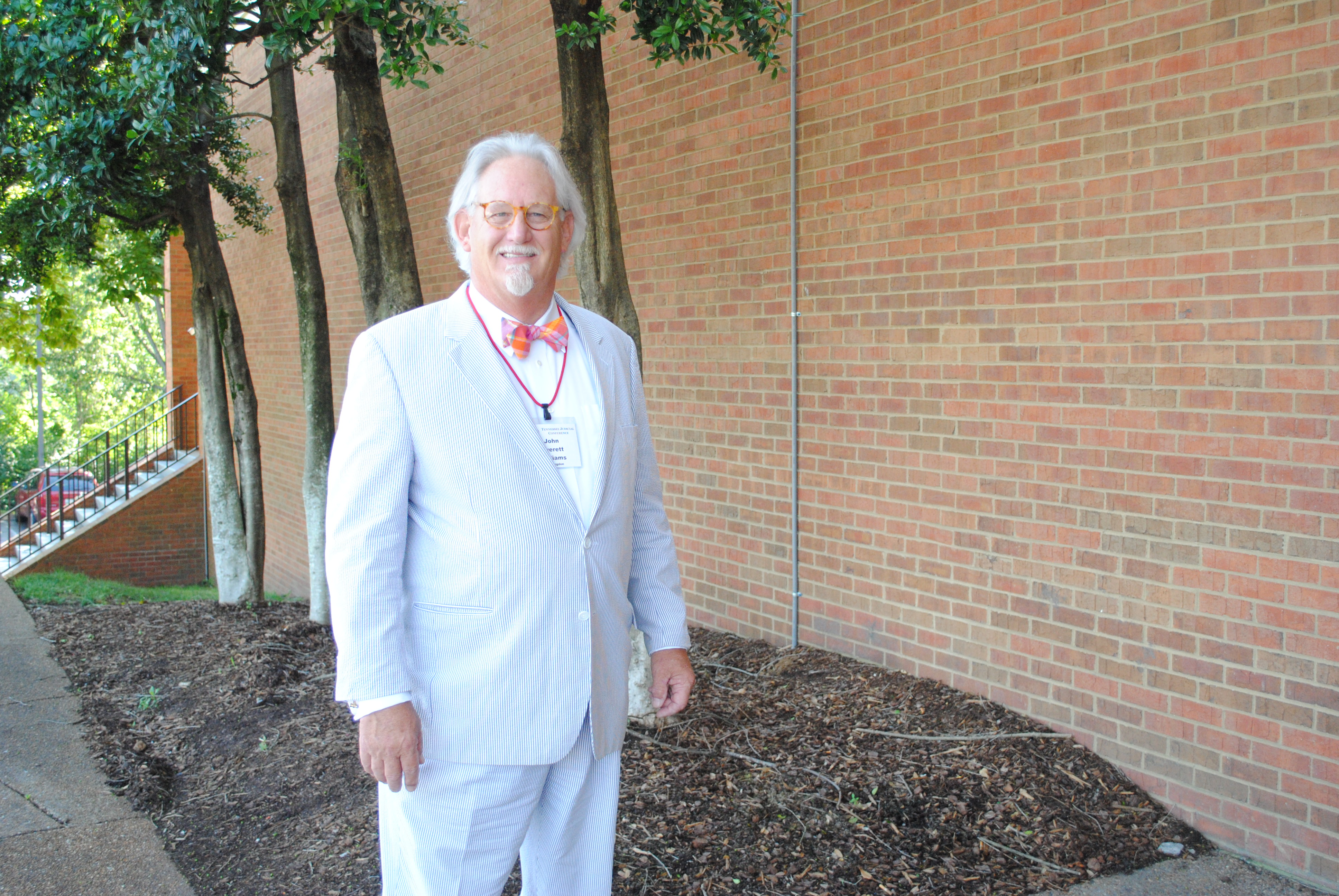