The Tennessee judiciary is mourning the loss of Court of Criminal Appeals Presiding Judge John Everett Williams, who passed away on September 2, 2022, at the age of 68.  He was appointed to the court by Governor Don Sundquist in November 1998, and was retained in elections in 2000, 2006, 2014 and 2022. In 2018, he was named presiding judge of the Court of Criminal Appeals, becoming the first judge from West Tennessee to hold that position in 25 years.

Judge Williams was from Huntingdon, where he practiced law for 17 years before being appointed to the Court of Criminal Appeals. He served as chairperson of the Tennessee Lawyers Assistance Program for several years and was a strong advocate for the organization.

Judge Williams was well known for his colorful dress and bowties as well as summer seersucker suits. He was a longtime member of the International Brotherhood of Magicians. He was also an established thespian, dazzling audiences at the Dixie Carter Performing Arts and Academic Enrichment Center just last month.

The Tennessee judiciary extends its most heartfelt condolences to the family, friends, and colleagues of Judge John Everett Williams at this time.

This story will be updated with more information as it becomes available.

"﻿What an honor and privilege to have known Judge John Everett Williams. To know him was to know a truly earnest human being. He served the judiciary for nearly 25 years and personified the words of Micah 6:8 “(t)o act justly, to love mercy and walk humbly with thy God”.  He will be remembered for his years of exemplary service to the State, his contributions to the judiciary and for being our “modern day version of a renaissance man” from Huntingdon, Tennessee. It is with a heavy heart that my prayers go out to his family, his colleagues and all who knew him.”
- Michelle Long, Director, Administrative Office of the Courts

"I had the great fortune to get to know Judge Williams during the years I worked at the Attorney General’s Office and argued often in the Court of Criminal Appeals. He was a judge who was always engaged in the moment and seemed to so enjoy the banter with his judicial colleagues and the attorneys. I will always remember the last oral argument I had before him in 2013. Just after opposing counsel and I finished our oral argument, we shook hands. Judge Williams stopped court and made a point of thanking opposing counsel and me for the civility and respect we showed to one another. He then spent the next few minutes talking to everyone in the courtroom about the importance of civility in the practice of law—and in life. To my great privilege, I was able to spend more time with Judge Williams and got to know a different side of him when I began working at the Administrative Office of the Courts. He became someone I routinely worked closely with, and we never missed an opportunity to chat about work and life. But Judge Williams never missed an opportunity to chat with anyone, and that is what I will remember him for—his sincerity, his warmth, and his interest in and respect of all people."
-Rachel Harmon, Deputy Director, Administrative Office of the Courts

"Judge John Everett Williams was a treasured friend and trusted mentor to so many in our State and beyond. He loved people, thought deeply about the hard and important questions in life, and lived each day to its fullest. I will always be grateful for the friendship Judge Williams extended after I joined the Court earlier this year. He was generous with his time and advice and quickly became one of my most cherished judicial colleagues. My prayers are with his family and all those who knew and loved him."
-Justice Sarah K. Campbell, Tennessee Supreme Court
"My wife Jane and I were so saddened to hear of the sudden passing of Judge Williams. Judge Williams, appointed by Governor Sundquist, was an outstanding jurist and valued friend of Tennessee's judiciary.  I will forever remember his mentorship to me, including his offer to drive me, as recently appointed AOC Director, and Justice Bivins across West Tennessee to introduce us to various local judicial officials. What a wonderful trip, enhanced by Judge Williams marvelous stories and his sometimes shifting into his unerringly accurate impersonation of his hero Mark Twain.  Words cannot adequately express his tremendous contributions to the Tennessee judiciary and his positive influence on his many friends, including me.  RIP Judge Williams."
-Bill Young, Former Director, Administrative Office of the Courts
"John Everett was one of the most amazing people I've ever met. He was brilliant, witty, kind, loving, and generous. I most admired his compassion for the poor, oppressed, and the disadvantaged men, women, and children in our communities. His passing is such a huge loss for so many."
-Richard Hedgepath, friend
"Judge Williams, or as he often instructed me, John Everett, was one of the mighty men in our State.  Everyone knows him as a respected, smart and fair jurist, and he certainly was all of those.  But what many may not know is he was a trusted adviser and friend to many of us faced with decisions having broad implications and no small gravitas to them.  I could not number the calls I made to John Everett asking for his frank, “no holds barred” counsel.  The subjects ranged from judicial selections to explanations of opinions from other courts to “ I’m not sure what to do here, what do you think?”  And he always delivered.  Not only did he deliver, but I never heard even a whisper about those calls from anyone else.  They were in complete confidence.   Finally, no one knows how many lives he saved, and tried to save, in the arena of mental health, addiction, and dependency.  The Tennessee Lawyers Assistance Program is a lifeline to many.  But there would be no TLAP without John Everett.  He was TLAP to many; not just the face of it, but the big arms that would hug you.  I am quite sure that I am not the only one shedding tears at this news.  We have lost a strong, deep voice for good, a smile and sense of humor unmatched, and an understanding of grace and mercy uncommon to many of us. Heaven, however, is experiencing a boisterous joy, celebration and laughter it may not experience for quite  a while.  Because that man knew where he was going. I love you, John Everett."
-Herbert Slatery, former Tennessee Attorney General
"Had the pleasure of appearing before him for oral argument many times. Appellate oral arguments can be intimidating for lawyers. His disarming personality and smile made for a light atmosphere. He will be missed."
-Mike Flanagan, attorney
"I can not begin to convey what a loss this is for all of communities of Carroll County and for Davidson County,, as well as,  the State of  Tennessee Judicial System.  John Everett was a bright light  always sharing his humor, his talents, his concerns for others and empathy/  I was honored to know John Everett for over 4 decades.  He worked closely with my mother, Miss Faye, who also served for the State of Tennessee in Carroll County.  The Tennessee River will never be the same without you  John Everett. Yes  his dapper style was quite unique  which sums up John  Everett, ,,, " One of a Kind"  I will miss you dearly, as well as,  your words of  wisdom and guidance.   West Tennessee  and Carroll County is  extremely  proud of you and all of your accomplishments.. Many will remember, " The Judge" , many will remember, "The Attorney" and so many will remember,  "A  Friend"  Fly high with the angels Judge John Everett Williams,  You are missed and loved by all.  Respectfully, The Walkers, Donna, Anthony and  family"
-Donna Walker, friend
"'No longer consider what sort of man the good man ought to be, but be that man.' Marcus Aurelius’ charge was lived out in the life Judge Williams. What a rare gift he was to the judiciary, what character we were blessed to see in  such a man, what a life well and humbly lived. Thank you John Everett! I will miss you, friend."
-Russ Heldman, Former Circuit Court Judge 21st Judicial District

“Judge Williams always stood out as a man of brilliance, grace, character, and humor. We, in the Attorney General’s Office, mourn his sudden passing and extend our heartfelt condolences to his family, friends, and colleagues.”
-Tennessee Attorney General (via Twitter)

"Judge Williams was a proud UTM alum and offered much wisdom, guidance, and encouragement to our students. He was a kind, gentle, and wise public servant; he will be deeply missed."
– University of Tennessee, Martin Political Science Faculty (via Twitter)

"Judge Williams was truly a do the right thing above all else, good hearted human being.  The last words he spoke to me on August 18 were that former First Lady Martha Sundquist had called him on election night of August 4 saying he was the last person she had voted for that day.  He relished that call and was so proud to tell that a Governor's wife would go all the way to the end of the ballot to cast a vote for him. Thankfully, John Everett is one who will not be forgotten. We are all truly blessed for having him in our lives."
-Randy C. Camp, Former Director, Administrative Office of the Courts

" I first met John Everett over a decade ago at the ABA national conference for Lawyers Assistance Programs (ABA CoLAP). He was there with a big group from the Tennessee Lawyers Assistance Program (TLAP) and I was there with folks from Louisiana’s LAP. Several things were immediately apparent upon our introduction. First, it was clear that John Everette was the real deal and “all in” on TLAP’s mission of saving lives and careers. Second, and within a minute of chatting with him, he spontaneously performed a pretty darn good magic trick for me and it was also clear that he was a truly unusual fellow. His booming voice, high energy, very mischievous grin, and piercing eyes added up to a singular impression: ‘Wow! I bet it’s great to have that guy on your side.’ And it was indeed. Many great men and women have championed the cause of TLAP and John Everett will be remembered as an unflagging TLAP advocate who was instrumental in TLAP’s growth and success. In reading other’s comments here and in conversations about his passing, it is clear that John Everett’s generous compassion and genuine support touched the lives of many people. He made a positive difference and left the world around him in a better place. And in addition, when we all think of him we smile. Who can ask for a better legacy than that? RIP John Everette. All of us at TLAP will keep you, your family, and your friends in our prayers during this time of loss."
-Buddy Stockwell, Executive Director, Tennessee Lawyers Assistance Program 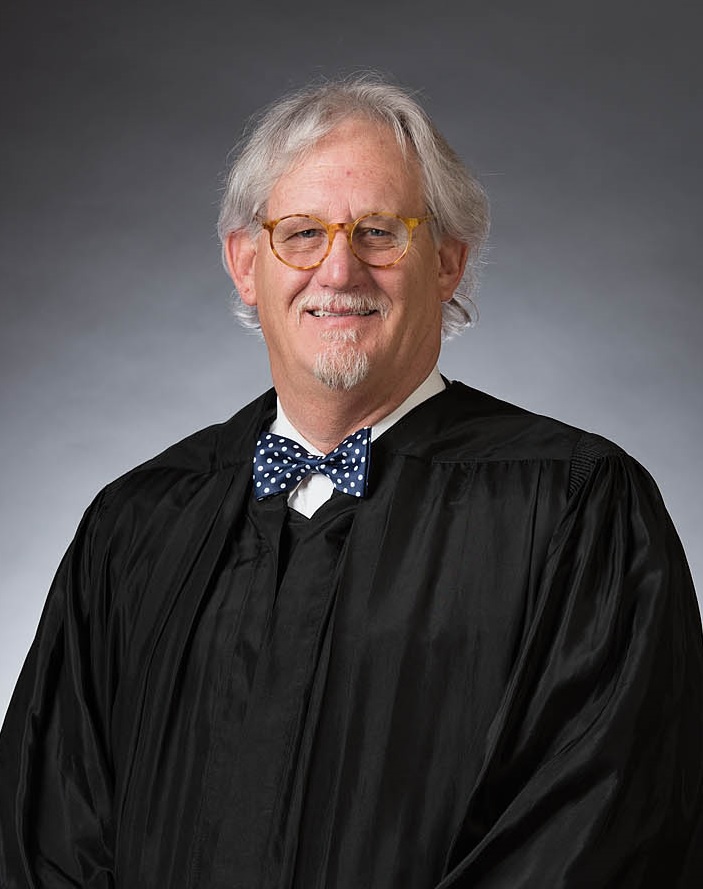