Justice Campbell was appointed to the Tennessee Supreme Court by Governor Bill Lee and confirmed by the General Assembly in February 2022. She is Tennessee’s 104th Supreme Court justice and seventh female justice. Immediately after the legislative vote, she took her oath of office with a borrowed judicial robe and her family Bible and headed across the street to her new office in the Nashville Supreme Court building to begin court business the following day. The June public investiture ceremony was a time to celebrate and enjoy the company of family, friends, and colleagues.

“Judicial investitures are ceremonies of dignity. But for Sarah, surrounded by family and friends, we want this to be a joyous occasion,” said Alberto Gonzales, Dean of the College of Law at Belmont University, in his opening remarks.

Scott Sauls, Senior Pastor at Christ Presbyterian Church, where the Campbell family worships, followed with the invocation. Then, on a lighter note, Justice Campbell’s three young sons, along with a group of friends, led attendees in the Pledge of Allegiance.

“When I was going through the confirmation process, my sons would ask me daily, ‘Are you a judge yet?’”  Justice Campbell said. “It felt a little bit like, ‘Are we there yet?’ on a 10-hour road trip. When I finally made it, their enthusiasm was unmatched. As I have told them often, this new job is a dream come true. But I already have the best job in the world as their mother.”

View Photos From The Investiture Here

Watch A Highlight Reel Of The Investiture:

Justice Campbell was born in LaFollette in Campbell County and primarily raised in Rogersville in Hawkins County. She attended the University of Tennessee, Knoxville, on a full-tuition merit scholarship; was recognized as a Torchbearer, the university’s highest student honor; and was elected president of the Student Government Association.  From there, Justice Campbell attended Duke University School of Law, where she was managing editor of the law review and received multiple academic honors, before heading to Alabama and Washington, DC for judicial clerkships with Judge William H. Pryor Jr. on the U.S. Court of Appeals for the Eleventh Circuit and Justice Samuel A. Alito, Jr. on the U.S. Supreme Court, respectively.

“The best part of being a judge involves working with young, smart, talented law clerks. One of the best lawyers to ever grace my chambers to work there was Sarah Keeton Campbell — a class act,” said Judge Pryor, who now serves at the Chief Judge of the U.S. Court of Appeals for the Eleventh Circuit.

“After her clerkship for Justice Alito, Sarah could have remained in DC long-term to practice law at a major firm where she would have undoubtedly had a lucrative and successful career. But, she came home to serve the public in the attorney general’s office,” Chief Judge Pryor said. “After growing up in a small town, attending public schools and earning her success, Sarah wanted to give back. Today, the people of Tennessee are the winners. Justice Sarah Campbell will be a star on the Tennessee Supreme Court.”

Back in Tennessee, Justice Campbell served as the Associate Solicitor General and Special Assistant to the Attorney General for six and a half years before taking the bench.

“July 13, 2015 was Sarah Campbell’s first day in the Attorney General’s office, and I know that because I put a reminder on my calendar each year to thank her,” said Herbert H. Slatery III, the Tennessee Attorney General and Reporter. “It was a good day when Sarah and her husband Scott decided to come home to Tennessee.”

“Justice Campbell is a reflection of what makes this state a beacon to America,” Governor Lee said. “Humility in service creates exceptionalism that you present to the court and that you will add to the remarkable nature of our state. And we are not only honored to be here doing this with you, but we are grateful for the choices that you’ve made and the decisions you have taken to serve this state.”

Justice Campbell began work immediately after her confirmation and joined the other four justices for oral arguments for the first time in April.

The Chief Justice of the Tennessee Supreme Court, Roger Page, complimented Justice Campbell on her abundance of integrity, which he considers to be the most important attribute of a Supreme Court Justice, as well as her “strong work ethic.”

Justice Campbell fills the vacancy left by the passing of the late Justice Cornelia A. Clark in September 2021 and is the first new justice on the court since Chief Justice Page joined the high court in 2016.

“Chief Justice Page, Justice Lee, Justice Bivins, and Justice Kirby, thank you for so warmly welcoming me to the Tennessee Supreme Court and for doing everything in your power to see that I succeed,” Justice Campbell said. “You are all exceptional jurists, and I am fortunate to join your ranks.”

Justice Campbell thanked Chief Judge Pryor for his “support, encouragement, and mentorship,” calling him “the gold standard for judges” and thanking him for “doing so much to advance the rule of law in our country.”  Justice Alito was unable to attend the ceremony, but Justice Campbell praised him as a “brilliant and principled jurist with a deep commitment to and respect for our Constitution.”

Justice Campbell said when Tennessee judges take an oath to support both the Federal and Tennessee Constitutions, they play an important role in safeguarding what makes Tennessee the state it is today.

“We are a critical part of the double security that Madison discussed in Federalist 51,” Justice Campbell said. “It is my obligation and privilege as a justice on the Tennessee Supreme Court to carefully and faithfully interpret and apply the Tennessee Constitution and to give effect to its provisions, including and especially those that are different from the Federal Constitution. I will approach that task as I approach every issue that comes before me—fairly, impartially, and with humility, and with a deep appreciation for the limited yet important role of the judiciary in our system of government.”

Family and Friends from Near and Far

Justice Campbell’s brother, Kevin, who is a lawyer in Rogersville, attended the ceremony, as did her proud parents, David and Gail Keeton. She credits her parents with her professional success.

“They taught me to work hard, treat everyone with dignity, and not to take myself too seriously,” Justice Campbell said.

Belmont University’s College of Law hosted the event as well as the reception that followed. 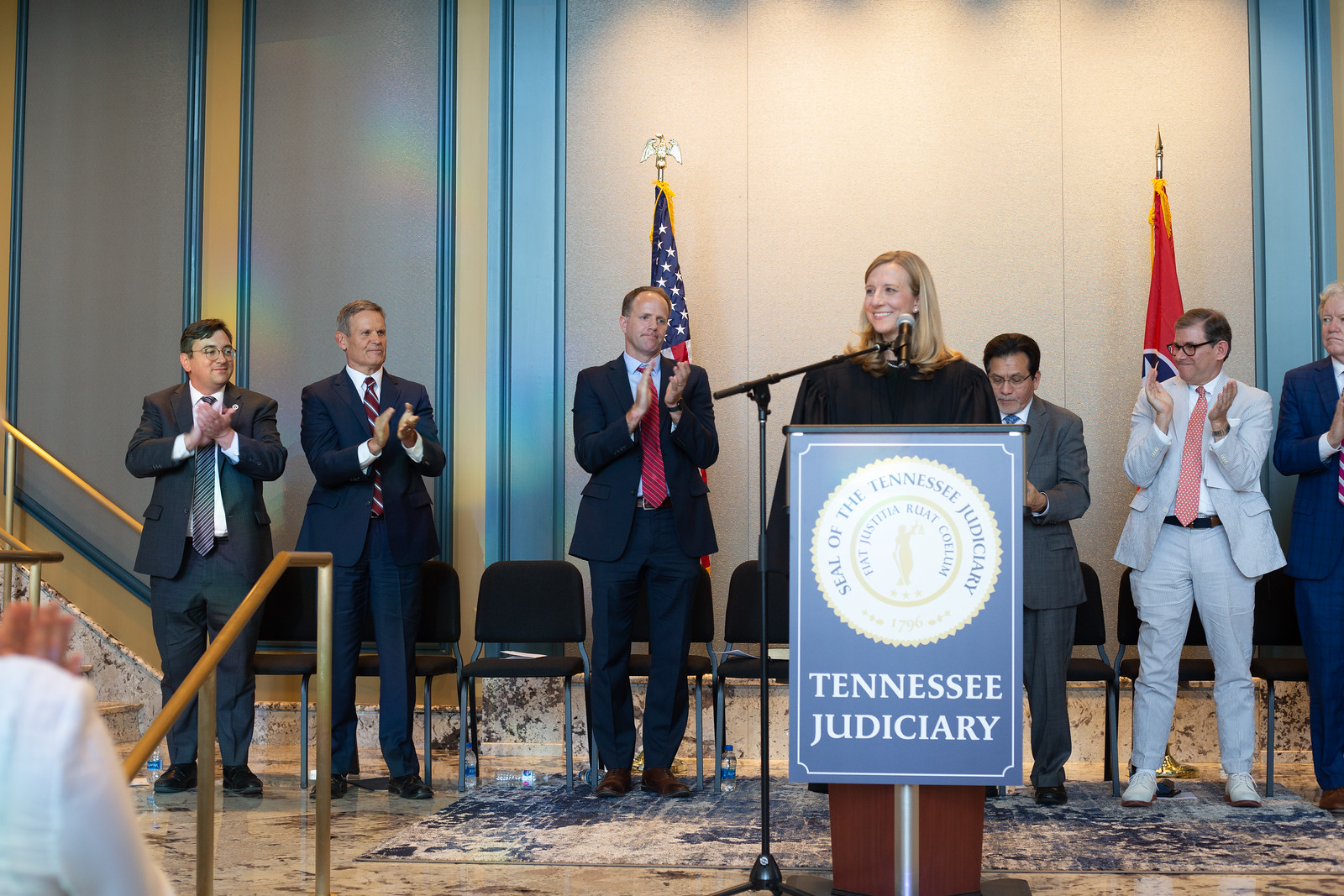