A commitment to helping themselves while serving others in need is what the 23rd Judicial District Drug Court is all about. That’s why this group of Drug Court participants and team members were among the first to lend a hand when catastrophic flooding devastated the community of Waverly, Tennessee.

“This is our community. These are our neighbors, our friends, our families. Our Drug Court participants are proud that they can give back to the community that gave them a second chance,” said Circuit Court Judge Suzanne Lockert-Mash, who also serves as judge of the district’s recovery court.

“Our participants couldn't wait to get involved. Everyone volunteered to jump in and do anything they could,” said Doug Beecham, Director, 23rd Judicial District Drug Court.“On the first day, some of our guys with experience on heavy equipment took to the roads and started clearing debris, cutting paths for the emergency workers. Everyone in the Drug Court program works regular jobs, so they would pitch in after work. When the weekend came, everybody was out there from sunrise to sunset.”

Drug Court participants weren’t asked to join recovery efforts, they wanted to help. There was no task too big or too small.

“Clearing the homes of trash was our first priority after the water receded. The flood carried people's belongings downstream, into other yards and houses,” said Kevin Batts, Director, 23rd Judicial District Drug Court.. “Several houses were moved completely off their foundation and into the middle of the road, so we had to maneuver around as best we could. The ground was totally saturated, making it difficult to drive or even walk in some areas. The hot sun created a strong smell as food rotted in the mud. We worked to remove all furniture and appliances from destroyed houses and piled it up by the road for eventual removal. We helped victims locate anything we could salvage, which usually involved digging through the mud.”

“I love these amazing drug court ladies. This little box holds pieces of my heart. My husband’s grandmother’s diamond that he asked me to marry him with, his class ring, my mother’s engagement ring, my grandmother’s special pin with a picture of my sister and me,” said Humphreys County Circuit Court Clerk Edie Stainforth. “I thought it was lost forever, but Ginger Massey (Women’s Case Manager) and her amazing drug court ladies chipped through that mud like they were looking for a dinosaur bone and found my little box of treasures. I lost all hope, but they didn’t give up.”

Another homeowner said he didn’t want to keep anything until a drug court employee found a family photo album. The kind gesture brought the man to tears.

“Public service is a vital part of our recovery program,” said Director Batts. “When you take ownership in your community, you take pride in making it a great place to live. When disaster strikes, you want to do your part. Drug Court instills that respect for social values, and makes participants want to go the extra mile to help their fellow man and woman. Everyone in Drug Court jumped at the opportunity to do their part.”

Drug Court participants are committed to turning their lives around and conquering their addiction. They work responsible jobs, regularly attend Alcoholics Anonymous meetings and work with their sponsors to maintain sobriety. Judge Lockert-Mash reviews their progress each week and encourages them to stay on track.

“These men and women are such warriors! So strong! I am really proud of how they turned out and helped so many people,” said Judge Lockert-Mash. She said Drug Court participants often have never been in a position to help others. She said these men and women were so happy to focus on the needs of the Waverly community.

“Drug Court is a second chance at life. This time around, our participants concentrate on getting out of themselves and doing good for others. They are rebuilding their lives, their families and their communities. It is rewarding for them to help others,” said Director Beecham.

“I love seeing what these men and women can accomplish. Recovery from drug addiction is a long, hard road. Our participants realize how fortunate they are to get a second chance. They are more than willing to give back to the community that has extended a helping hand to them. The real reward is seeing them rebuild themselves,” said Director Batts.

The 23rd Judicial District Drug Court Program was established 22 years ago to help addicted criminal offenders become productive citizens in our community. Those accepted into the Drug Court Program are sent to in-patient treatment programs for at least 28 days. Once treatment is completed, participants live in one of the Program’s Sober Living Houses.

“It is rewarding to see Drug Court participants turning their lives around. As we teach participants to rebuild their lives, we see those little victories every day. It's a rigorous program. It's a lengthy program. No matter what adversities they face, they know the Drug Court Team has their back — so long as they do the right thing. Their hard work during the flood cleanup shows how committed they are to changing their lives for the better,” said Judge Lockert-Mash.

National statistics show that 75 percent of Drug Court graduates remain arrest-free at least two years after graduation. Drug Court Programs save taxpayers thousands of dollars a year by reducing the cost of trials and incarceration. 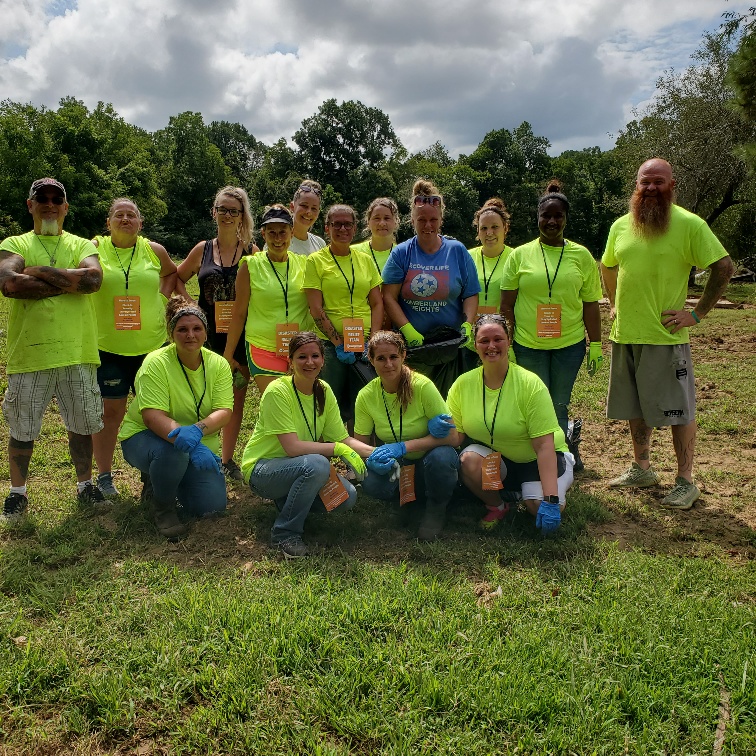