For the first time, delegates at Girls State will also participate in the SCALES program. As part of the week-long American Legion Auxiliary Girls State program, the 500 Girls State delegates will hear oral arguments in two Supreme Court cases on Thursday, June 2, at Lipscomb University in Nashville.

“We are thrilled to bring the SCALES program to both Boys State and Girls state this year as part of their education about Tennessee state government,” said Chief Justice Cornelia Clark. “The SCALES program offers a unique opportunity for students to get a first-hand look at the Supreme Court in action. We hope this program will foster a greater appreciation for the judicial branch of government and the important role it plays in our society.

Issues in the cases the students will hear at Boys State include whether a defendant’s conviction of two counts of reckless endangerment with a deadly weapon and felony evading arrest with risk to others constitutes double jeopardy, and whether a trial court erred in amending an attempted aggravated battery judgment to include community supervision as required by statute even though it was not included in the original judgment.

Girls State students will hear a divorce case involving whether a wife is entitled to alimony and a case involving a car accident while working and the amount of the employer’s uninsured motorist coverage.

More than 21,000 Tennessee students from more than 440 high schools have participated in the SCALES project since its creation in 1995.

To see photos from the SCALES at Boys State, please view the slideshow below. Photos courtesy of Tennessee Boys State. 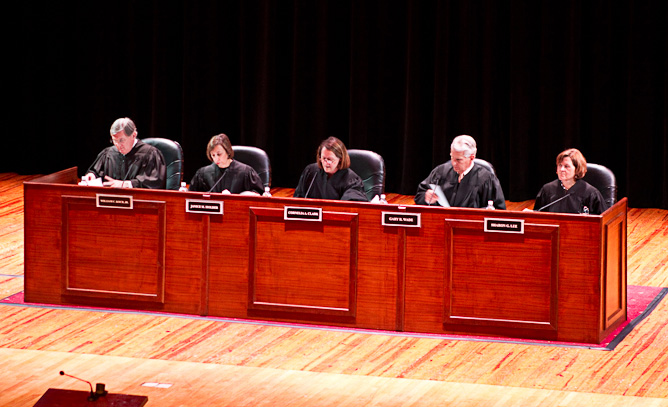