Rob Pharris joined the Army on Nov. 4, 1987 as a member of the Airborne Division. While in service, he experienced back and knee pain.

“I didn’t dare go to the medics and tell them I have knee problems because they might not let me be airborne,” said Rob Pharris, Veterans Treatment Court Graduate.

Sadly, his chronic pain led to a long battle with drugs.

“It was for pain at first,” said Pharris. “Then I got to liking it and it was on then. The first time I experienced any type of drug was marijuana. I was six years old. My older cousins thought it would be funny. That was my biggest problem, really, was the marijuana. Then, I went for pain. Then, it went from there to recreational. I had to have it.”

Pharris exited the military on Dec. 28, 1995. Not long after, he found himself heading down a dangerous path of using and dealing drugs. After getting into trouble with the law, Veterans Treatment Court (VTC) became an option.

“They offered it to me and I turned it down twice,” said Pharris. “When I got arrested the third time, I accepted Veterans Court. Nothing I was doing was working. It’s not like I wanted to do the drugs and everything, I was at the point where I had to. I wanted it to stop and I read information on Veterans Court and said, ‘This is going to be for me.’”

Judge Gary McKenzie presides over the 13th Judicial District Veterans Treatment Court, which serves Clay, Cumberland, DeKalb, Overton, Pickett, Putnam and White Counties. Prior to taking the bench, he served in the Tennessee Army National Guard for eight years as a Judge Advocate General (JAG officer). He was deployed to Iraq as part of OIF Iraqi Freedom in 2009, where he served in Balad as JAG officer with the 194th engineer brigade out of Jackson, Tenn. Serving alongside him was retired Coffee County Judge Craig Johnson, who at the time was his Executive Officer. Judge Johnson had an impact on Judge McKenzie’s decision to help Veterans.

“When I got back from my deployment in 2010, there were a lot of cases we were beginning to see, I was a prosecutor, where individuals who had served were coming back and had substance abuse and problems with trying to treat their PTSD by self-medicating,” said Judge McKenzie. “There were a lot of cases that would come through the court system, where we had Veterans who had had those issues and they weren’t necessarily getting the help that they needed. If anyone deserved a second chance, it was those men and women who wore the uniform.”

Another person who influenced his decision to help was Judge Seth Norman, who at one time ran the Recovery Court in the 13th Judicial District. When Judge McKenzie ran for office in 2014, one of his goals was to establish a Veterans Treatment Court. Shortly after he was elected, Judge Norman helped him get the VTC up and running. Today, Judge McKenzie credits the program’s success to a structure similar to that of the military.

“The Veteran side of the recovery court model, they seem to do really well because when you’re in the military you enjoy structure,” said Judge McKenzie. “I think sometimes they have a little harder transition away from that, once they’re finished with the program than maybe the others do. Generally, their success rate is higher than the other recovery court participants. When you’re in the military, it’s a whole different language. It’s a whole different culture, if you will. I do think people who have been in the military have an understanding that they share with other veterans that those who have not been do not have, so I think it benefits me to be a judge in the VTC to have had that experience.  I can communicate with them in a similar language, if you will.”

Veterans Treatment Court provides treatment, counseling and therapy for substance abuse as an alternative to incarceration. The first step is one or more years in a residential treatment center, followed by outpatient counseling and vigorous drug testing. VTC’s special process of pairing Veterans was something Rob Pharris appreciated

“It’s easier to talk to another vet than somebody who isn’t a Vet because they don’t understand,” he said. “You have to experience it. I can’t explain it. They had a lot of support, a lot of support for the Vets. It was overwhelming support.”

Like so many Veterans, Pharris found it difficult to adjust to civilian life after leaving the military.

“I’m still having problems adjusting to it and I’ve been out for a long time,” he said. “I have multi-complex PTSD, which causes confusion, paranoia and anger. I don’t get angry, I go from something happening right now to rage. It doesn’t progress up. They’ve got me on all these types of medications to create that buffer, so I can think about it before acting. I can slow down enough to where I’m ok. I can still be angry, but I’m not raging.”

“It’s more than just going to a meeting and talking about drugs,” said Pharris. “This is a whole new way of life. I’m living a life now that I thought I would ever have.”

Despite being diagnosed “unemployable,” Pharris is enjoying his role as a house dad.

“I’m married,” said Pharris. “She works and I take care of all the stuff around the house – cooking, laundry, I work out five days a week. I take off when she’s off of work. I’m just so blessed. I’m enjoying life. I went from not wanting to wake up and wanting to die, to I can’t wait to get going.”

Seeing Veterans, such as Rob Pharris, turn their lives around is rewarding for Judge McKenzie.

“I think one of the things you learn is it kind of puts a human face on others struggling with addiction and issues,” said Judge McKenzie. “Sometimes, as a judge, you’re kind of just up there and you’re a referee. When you’re dealing with the individuals like we do with our recovery court models, you get a deeper understanding of the struggles they are going through and you kind of determine that they aren’t that dissimilar to most people that we know. I think it helps you have a better understanding in some of the decisions that you make that affect their lives.”

Although Judge McKenzie doesn’t keep up with his graduates too much on a personal level, he is interested in knowing how they are doing.

“We keep tabs on them to see that they are doing well,” he said. “In my time in the system, which is 22 odd years, seeing the recovery court and Veterans treatment court people has probably been one of the better things that I have done in my career.”

In fact, keeping tabs on Rob Pharris is easy. Pharris lives down the street from Judge McKenzie’s office and occasionally stops in to update him. It’s something he’s happy to do, after graduating from a program that gave him his life back.

“It taught me a completely new way to live,” he said. “It takes you down to nothing and then you get built up. It’s not just how to stay off drugs, it’s life-changing. The program is two years long and that’s what’s needed because it gave me enough time to get my head cleared, but also it shows you how to take on responsibilities. They teach you all of that while you’re in it. It’s not just a drug thing, it’s everything. We had a small group of veterans and we got to hold our own meetings, which I found pretty important because there are some things you’re not going to talk about unless you’re with another guy. My anxiety left while I was there. I thought it would go up. I felt more like at home.”

Like any program, there’s always room for improvement. Judge McKenzie said the number one need is funding for long-term treatment.

“I have seen we have better success for those who have done long-term in-patient treatment than we do those that do 28-day programs,” he said. “That’s been my experience. That’s anecdotal, I know. I certainly haven’t done a study on it. If there’s one thing that I wish we could do differently, I wish we had more beds available.”

VTC graduations are held once or twice each year. Rob Pharris is a member of the most recent graduating class. Governor Lee attended that ceremony, where Pharris and the other graduates gave short speeches about the difference VTC made in their lives.

“I’m definitely doing very well,” said Pharris. “I’m able to handle situations completely different, in a healthy way. If there’s a Veteran out there struggling with anything – drug abuse, anything – you should check into Veterans Court, especially if you keep getting in trouble like I did. It’s an alternative to prison. It’s harder than prison, as far as how strict they are. If you take Veterans Court, you are not taking a short-cut in any way. It’s two years and it’s really intense.”

Candidates for Veterans Treatment Court are selected through an application process, approved by both the District Attorney General and Judge McKenzie. To date, the program has experienced great success with only a 3% recidivism rate versus the average of 33% for other programs. In addition, VTC offers a significant savings to taxpayers versus the costs associated with incarceration. 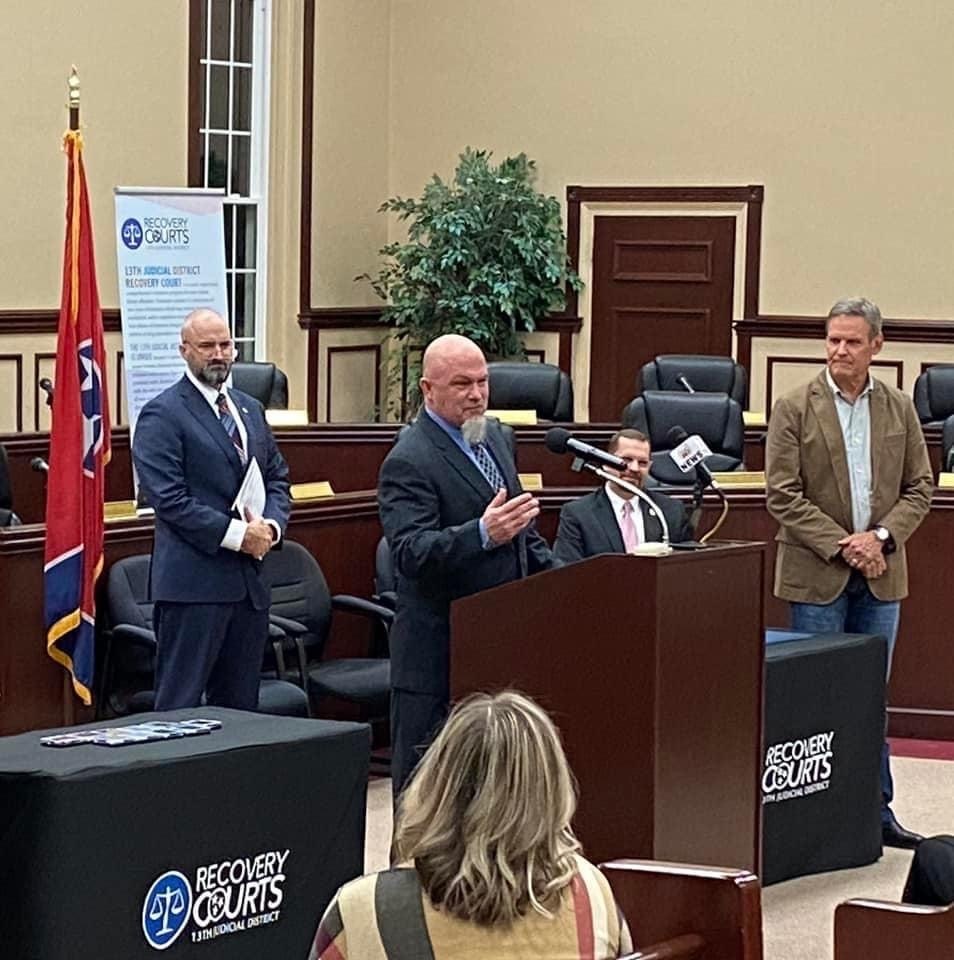